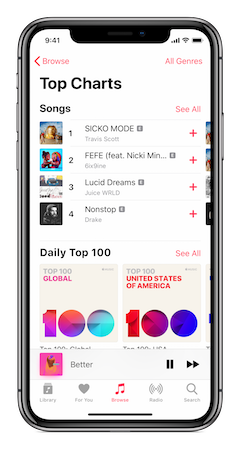 Apple is adding a new feature to its music streaming service today — charts of Apple Music’s top-streamed songs. Rolling Stone reports that the company now has 116 “top 100” charts, which include one global chart and one for every country in which the service is currently available. They’re rolling out to users through a software update today.

Apple Music, which features exclusive documentaries, curated playlistsand shows, continues to grow in popularity. In July, the service reportedly overtook Spotify in US subscribers and Apple keeps adding useful featuresthat will likely only help that growth. Earlier this year, Apple took its music business to the next level, announcing its own music publishing division.

The 5G-airlines crisis was mostly averted. Here’s what happened – and what we still don’t know

The 5G-airlines crisis was mostly averted. Here’s what happened – and what we still...